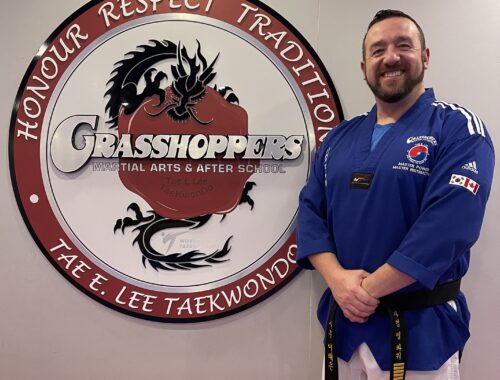 Master Power started TaeKwonDo in 1992 through a local martial arts instructor who was a student of Grand Master Tae Eun Lee. Master Power instantly fell in love with this style of TaeKwonDo, as he had previously tried several other martial arts. He knows what it’s like to be a student as he is always making trips to Ottawa to visit Grand Master Lee, and to upgrade his knowledge and skill.

Master Power started in the Martial Arts when he just 15 years old. During this time he was trying to put himself through school and found himself losing focus and short tempered due to long school and work days. After Master Power’s initial 3 month signup he was offered a scholarship in lieu of cleaning the dojang as his instructor knew of the financial hardship Master Power was experiencing. This truly was a turning point in his life as not only was he learning Martial Arts, but he was learning life lessons that could not be taught any other way. Master Power now had a new passion, and found himself training in the dojang 7 days a week. This eventually led to a full time paid position as an instructor.  Master Power then contacted Grand Master Lee and in November of 2000 he opened the first Grasshoppers Moo Kwang System in Eastern Canada.

Master Power is a staple of the community volunteering thousands of hours through many different sports and activities.  Master Power is the Past President of Taekwondo Canada and is a proud Sergeant with the Halifax Regional Police.

Master Power is the Past President for Taekwondo Canada, where he helped to further Taekwondo in all levels of Canada.

Master Power is proudly employed as a police officer working as a patrol Sergeant with the Halifax Regional Police Department.